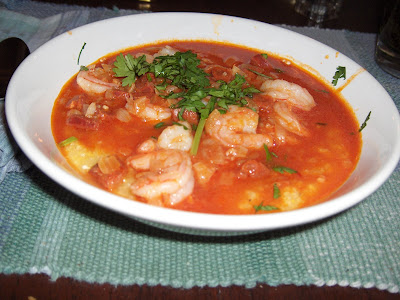 Here's an original dish. The taste was so remarkable that, even though our portions were fairly large, Peter said when he was about 2/3 finished, "If you think I'm not going to eat all of this, think again!" I, too, managed to polish it all off. It was one of those meals where a couple of hours later you are still savoring it in your taste buds and in your warm tummy.
For the shrimp/chorizo:
1 tbsp olive oil
1 tbsp butter
½ medium onion, chopped fine
1 large clove garlic, minced or pressed
¼ cup Spanish chorizo, diced fine
1 heaping tbsp tomato paste
1 cup chicken broth
2 tbsp clam juice
1 tbsp fish sauce
2 springs each, fresh thyme, basil and oregano
10-12 oz. shrimp, peeled and deveined
pinch paprika
pinch black pepper

Bring the broth to a boil over medium-high heat. Whisk in the grits, salt and pepper. Reduce the heat to a low simmer and cook, stirring frequently, for 10 minutes or until slightly al dente but not gritty (no pun intended).

For the shrimp/chorizo:
Melt the butter in olive oil over medium heat in a large sauté pan. When melted, add onion and cook 4 minutes. Add garlic and cook 30 seconds

Make a space in the middle of the pan and add the chorizo and tomato paste. Stir a few seconds then incorporate with the onion and garlic. Add the broth, clam juice and fish sauce and the herbs. Simmer 10 minutes over medium low heat.

Stir in the shrimp and when simmer resumes, cook only 2 minutes for 41-50’s, longer for larger shrimp.

Remove the pan from the heat and stir in paprika and pepper. Serve at once over the grits.
Posted by Stephen C at 12:09 PM 1 comment:

I’ve been lazy about posting lately. I’m going to make up for it over the next couple of days. Last night Peter and I made a constructed salad which we served with thin slices of rib eye steak. We had cooked a “cowboy” rib eye the night before. It was a whopping 2 pounds of meat with a single rib bone and a slightly regrettable amount of fat, much of which I trimmed away.

I didn’t (again the word regrettably) take a picture of it so I poached one from the internet. Here it is:

Is that magnificent or what? I had two meat rubs on hand, both left over from other recipes. One was by Anne Burrell, whose show, “Secrets of a Restaurant Chef,” I watch religiously. Unfortunately it was way too salty when I used it the first time. However, by mixing it with another rub which included ground coffee, it was transformed into a great concoction.

The one thing I will do differently when I cook a cowboy steak the next time is set a slightly lower target temperature. After browning one side thoroughly (4 minutes), I finished it in a 350° oven (which took about 20 more minutes), letting the internal temp rise to 135°. This gave us somewhat more of a medium steak instead of my preferred medium rare. I think 130° is a better temp, especially because you let it rest for 10 minutes before slicing. It tasted wonderful nonetheless.

We came up with the idea for these composed salads as we scoured our brains for inventive ways to use lettuce and endive from our garden. The picture below is a combination of those two greens with some toasted garbanzos, sliced radishes, croutons, and sugar snap peas which were blanched for a couple of minutes and then shocked with ice water. You’d think we were having sex if you heard the sounds we made while consuming this consummate creation. 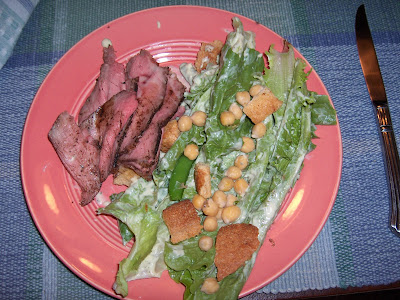 We have a great time pottering about in the kitchen together. Here’s a pic of our culinary work area: 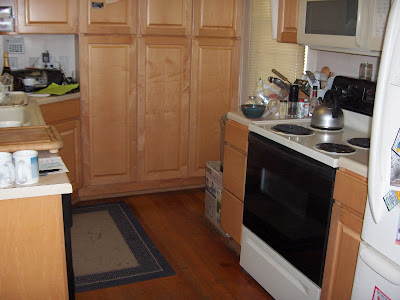 It’s a little tricky jockeying around one another, but we’ve got it down pretty good.
Posted by Stephen C at 1:37 PM No comments:

By the time you finish reading the prologue of Jason Sheehan’s book, “Cooking Dirty,” you will be breathless, horrified, amused, and maybe even frightened: as in what could be next? In a self-deprecating torrent of super-heated prose, Jason charts the events during dinner service in a fantastically hot, chaotic and frantic kitchen in a restaurant in Florida.

Deeper into the book the pace slows and aspects of Jason’s persona begin to reveal themselves, or rather I should say Jason reveals them – in almost painful detail.

I should point out that Jason is a friend and we share lunch regularly with a foodie group I created 3-plus years ago. I began reading “Cooking Dirty” with every hope that I would love it…and I do. I have wondered for some time how he came by his way with words. Early on in the book he states that he wanted to be a writer and kept journals on a regular basis.

My partner, Peter, once sat next to Anthony Bourdain’s mother at a performance at the Metropolitan Opera. When Peter mentioned her son’s book, “Kitchen Confidential,” her comment (delivered in a marked New York accent) was, “The language!”

As a former sailor who could swear like one years before boot camp, I love it when a writer can use the words “pork” and “pussy” in same sentence, as Jason once did in a Westword review. In his writing, the “f” word appears with some regularity, always causing me great amusement.

I am writing these paragraphs in between reading snatches of “Cooking Dirty, “ always with great anticipation for what will come next.

I suppose I could have been mildly offended by his description of how he felt about what was on the kitchen radio at the pizza joint where he worked when he was 15: “the kitchen radio…was forever tuned to a station that…played only one song that was twelve hours long, sung by a gay Italian man who’d recently been punched in the mouth, and prominently featured an accordion being played by a spastic and tone-deaf monkey.” You know what though, I majored in political incorrectness in both high school and college and that marvelous turn of phrase made me roar. I had to read it to Peter before starting the car to head home from the gym. He too roared.

Is the prose purple? Don’t know, but it is extraordinarily colorful, and not the speech I’m used to from the rather mild-mannered, polite fellow Jason seems to be today. But then I’m only around him in mixed company.

“Poor life choices,” seems to be a recurring theme for Jason. But few of us (and certainly not moi mème) make all the right choices. “Always do the right thing,” an iconic line from Spike Lee’s similarly named movie sometimes just means have another drink, another cig, another snort of something.

Do I suspect some embroidering of this life story? Sure I do. Especially when I read, “These stories tend to grow in the telling.” I tell stories about myself that have grown in the telling just because you need a story to be a good one, even a great one. As long as the core of the idea bears a solid kernel of truth I say go for it.

Jason takes well-deserved pride in his leadership in the diner kitchen where he works for a while. As I write this, I’m about 1/3 into “Cooking Dirty,” and still enjoying every page. How does he continue to come up with wry, witty, hilarious (and sometimes filthy) turns of phrase?

Oh shit, he’s crashed and burned at the diner. When Jason hits bottom he doesn’t really bounce back up. Rather, he bounces along the bottom. When I read to my partner, Peter, the part when he goes back to Rochester and knocks on his parents door to be taken in, I got all choked up. I’m reminded of the Robert Frost line that has stuck with me for decades: "Home is the place where, when you have to go there, they have to take you in."

Lord, this tale is unrelenting. It appears that some form of redemption is at hand as his relationship with Laura develops. I’m really interested to know about how he transitions into a writer. I know it’s coming, but he hasn’t mentioned writing since his high school days I think.

I want to meet Laura. The saga of the developing relationship between Jason and his wife-to-be is as convoluted as Jason’s life between 15 and 25, the point I’m at in the story. His life seems more settled, though that is a relative term. He’s productively employed, more or less healthy, but obviously not at an arrival point yet; rather, the departures are slightly fewer, the destructive behavior somewhat more moderated, the story telling still bold and brash.

Well, we’ve finally gotten to the part where Jason becomes a writer, not entirely about restaurant reviews at first. After an epic episode of cat-fighting with Laura, she seemed to have gotten his attention about the writing idea and he gets his first job. It appears that Jason’s life may be about to take a turn in an upward direction.

I am so near the end of the book and yet I can’t sort out the kaleidoscope of emotions, fear, loathing, horror he’s exposed me to. I know that I’d have to stretch to imagine my own life, not entirely uncheckered, being so chaotic and mercurial. I find myself wondering how Jason can remember so much detail, much experienced in drug and alcohol induced near stupors. He seems at this point near to waking up from a lengthy (nearly 15-year) nightmare.

The moves (devious) into a writing career are cool. I’m so glad Jason got away with what he did to get one of his first writing jobs. I won’t spoil the story for anyone by telling it.

Turns out even after coming to Denver to assume his post at Westword, Jason still got whacked out on occasion. But he did come here with Laura as his wife and they acquired a daughter whom Jason clearly adores. Peter, after hearing me read him another portion of the book this morning, asked if I thought there was a movie possibility here. Jesus, I would think so. We’re debating who would play Jason.

Am I reading something into his story if I suspect there will always be a longing for the kitchen inside of Jason. What I hope there is is a long string of writings in his future so that they’ll be in my future as well. Keep drinking the snake wine, Sanjo.
Posted by Stephen C at 12:05 PM 2 comments: