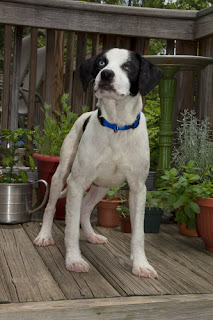 Yesterday Jonah attacked my partner/spouse, Peter, twice early in the morning, backing him into a corner but not actually doing any real harm. He had bonded so well with me and I think he was being protective and jealous. Whenever Peter would come home from work or downstairs in the morning, Jonah would growl.

I had to return him to the adoption agency yesterday afternoon. Had a good cry in the van afterward. In the space of less than 2 weeks I became super fond of him, even with his phobias, his hatred of the out of doors, his freakish behavior when he heard aluminum foil being crinkled, and more. What follows is my original post about him. I intend to get another foster dog, perhaps as soon as Monday.

Previously on "Stevie Does Doggies":

We took Jonah in last Monday as a foster pet. He's not close to behavior that would encourage anyone to want to adopt him. He is afraid of everything, hates being on a leash, and hides most of the time under one table or another in our living room. As a matter of fact, in 6 days he has not even left the living room (other than to go out to do those things that a dog must do every several hours).

I've proposed to his adoption coordinator that we should consider anxiety medication, but, as so often happens with volunteer situations, I have not had a reply.

He is a handsome dude, about 30 or so pounds, and will come curl up at my feet from time to time. Just wanted to share him with you.
Posted by Stephen C at 10:03 AM 8 comments:

You will need to find a Greek or Mid-Eastern market to get taramosalata, which is a dip-like paste of carp roe. That being said, I've made a substitute version that's easier to find: take a jar of caviar off-the-shelf at the supermarket (buy the best - most expensive - one they have). Mix it with sour cream or yogurt. Voila! You've done it!

This time I "cured" whole shrimp (10 oz. 21-25's for 2 servings) instead of slicing them in half. Drop peeled shrimp into boiling water. After 30 seconds drain and rinse under cold water. Steep in a mixture of lemon juice (1 lemon), lime juice (2 limes), shallot, and salt for 30 minutes (in the fridge). If you're not going to eat the shrimp immediately drain off the juice to stop the "cooking" and keep them refrigerated.

Toss in a mix of taramosalata and sour cream (proportions are up to you - I go about 1 to 1) or the substitute I suggested above. It's a delicious protein for a hot summer's supper. 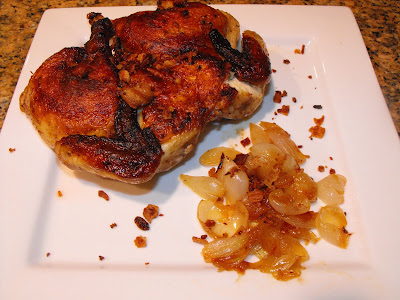 It's been quite a while since my last Cornish hen posting, and my technique has evolved.

Spatchcock one bird (dinner for two).
Brine in 2 cups water (with 2 Tbs kosher salt dissolved in it) for at least 2 hours; or up to 4.
Rinse well and dry. Drizzle with butter, season with pepper, and place lemon slices under the skin (optional).
Insert temperature probe if you have one and roast in a 350 oven for about 30 minutes.
Place under the broiler to brown the skin. Target temperature is 165 degrees at the thickest part of the breast - where the wing is attached. Let rest 5 minutes.

Is that easy, or what?

The Changing of the Swiss Chard 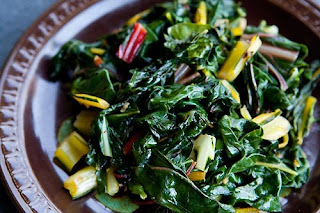 Chard is a beautiful thing; to look at, to cook, and of course to eat. One good-size bunch reduces down to 2 perfect servings.

Mince up some garlic (I use lots) and some onion or shallot or scallion. Saute in olive oil and butter over medium low heat for 2 minutes.  Add the stem pieces for 3 minutes, then add the leaves. Toss frequently for 5 or 6 minutes until wilted and tender. Sprinkle with a pinch of cinnamon, a pinch of powdered ginger, and a generous pinch of garam masala if you have it. Naturally you'll want some salt - how much is up to you.

I think Swiss chard goes on my desert island list.
Posted by Stephen C at 10:38 AM 9 comments: