I cook Mexican at Leslie's 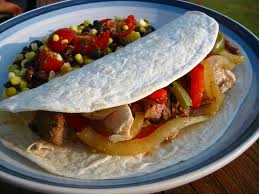 Leslie is a long-time friend, former employee, and our hostess for a month while Peter and I were looking for a place to live when we came back to DC last January. I prepared a Mexican dinner (fajitas) to which Peter contributed a big pan of flan for dessert. All in all it was a swell spread, originally intended for six people, though in the end just five. (More food for all of us.) Schlepping food (and my wok) to someone else's house takes some organizational skills (we were also schlepping the dog, oy). But I have those skills. List after list of what to do to be prepared, ingredient list, mise en place plan, etc. I almost got a little intimidated, but in the end, no way Jose. We had a great time. Everybody ate like they were both hungry and really liked the food. I cheated slightly by not making my own salsa, but a boy can only do so much. Got a jar of some good quality salsa and a bag of chips for dipping. That was our app. Here's the main course. This seems very busy, but it's not if you prepare, chop, etc. everything ahead of time.

2 large green bell peppers, cut into ¼ inch strips
1 large red bell pepper, cut into ¼ inch strips
2 medium onions, cut into ½ inch half moons
3 large garlic cloves, minced
salt and pepper to taste
shredded lettuce
refried beans
guacamole
lime wedges
pickled jalapeno slices
2 or more flour tortillas per person, wrapped in foil (1 per person for pre-heating) and kept in the oven while the beef and veggies are cooking.
Marinate the beef for several hours. I used my wok to do the stir frying. First the beef, at room temp in a small amount of very hot oil. Toss with tongs for 2-3 minutes, remove and put into a dish in the oven at 250 degrees while you cook the vegetables.

Add a little more oil to the wok and toss in the veggies. Using the tongs keep them moving (over fairly high heat) until softened to your taste (5-8 minutes).

I placed lettuce, refritos and guacamole on each dinner plate and then let the guests assemble their own fajitas. Lime and jalapenos were in a separate bowl.
Posted by Stephen C at 12:54 PM

It sounds like a great meal to me and I'm sure you made it proud. Kudos to you, Stephen! Your cookbook is awesome and you'll be hearing more about it on my blog before long.

You can never go wrong with fajitas! Seems like everyone likes them.. and despite all the extra work you had to put into it to get it there, I'm sure everyone had fun with meal! I know I would :)

Now and again you have to cut corners in cooking, the main thing is every one seems to have liked your meal and the company. And like you mentioned - preparation is the key, then more time with your guests.

What a great meal, Stephen. I love the way you've spiced the fajitas. This is a great company dish because I've never meet anyone who didn't like the.. I hope you have a great day. Blessings...Mary

It's hard to beat great fajitas and they are perfect for a party like that, everyone picks their own flavor preferences.

I cheat too. I know skirt steak is traditional but I prefer flank steak for fajitas.