Chicken pot pie (no, you can't smoke it) 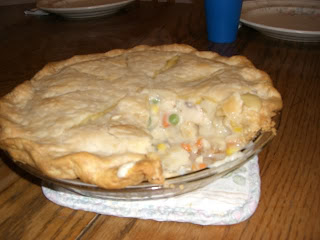 Herewith is yours truly's very first attempt at chicken pot pie. If it isn't worth a gold medal, it's at least a silver. I won't take too much credit for it, I did follow a recipe more or less (those who know me know how rare it is for me to follow anything). One thing that attracted me to this particular plan was that it calls for two crusts. The addition of potatoes was my idea, the cooked chicken thigh meat was leftovers from the weekend (it could be cooked chicken breast if you are blackmailed into only buying that), the crusts were Pillsbury, the patting on the back - totally my own. I did the preparations in my own way to make it as simple as possible. (My favorite song is "I did it my way" by you-know-who.)

Place one pie crust in the bottom of a deep 9-inch pie pan. Preheat the oven to 425 degrees.
Place the chicken stock in a large saute pan along with the potato, carrot, celery, onion, salt, pepper and celery seed. Bring to a simmer and cook maybe 10 minutes until the carrots are tender. Remove to a bowl and add in the peas. Pour the broth into a measuring cup and add more to it to come up to 1 3/4 cups.
Melt the butter over medium heat. Whisk in the flour and continue whisking while it cooks for 2 minutes. Whisk in the broth and milk. Bring to a simmer and keep stirring until it thickens.
Place the vegetables in the pie pan. Pour the gravy over the top. Stir it a bit carefully to get the gravy to merge down into the veggies.
Cover with the other pie crust and pinch the edges together. Cut a few slits in the crust to allow steam to escape.
Bake for 30-35 minutes until the crust is brown and all else is bubbling.
Let it sit for 10 minutes to avoid pizza mouth. Serve with a nice salad.

Laughing at your blackmail comment, so true. I just made a white bean chili and the first thing I said when reviewing the recipe was, "Oh, she misspelled 'thighs' as 'breast'"

Love me some chicken pot pie, especially once the temps start dropping.

That is one packed pie! Just wish it was on my kitchen table tonight, thigh and all!

I have friends that say they only like breast meat. The boneless skinless breast meat. I just look at them blankly when they tell me that. I'm a thigh and leg kinda girl. Oh and skin on please.

This by the way sounds terrific. Chicken pot pie is one thing I've never been successful at. It just never turns out right and I'm not sure why.

any pie with that much pastry and all that creamy gravy oozing out is worth a gold in my book any day!

What? You followed a recipe?? I don't believe it :)
Your first attempt ever is definitely worthy of gold. It looks delicious!!

This looks fabulous, I agree thigh meat is way more flavorful, not to mention juicier than breast so great for this.
Mary x
PS if you're in the market for a camera best buy is your best bet!

I love chicken potpie and this sounds delicious. I prefer to use thighs in recipes that I develop,but when I'm working with one developed by some one else I use whatever they specify. I hope you are having a great day. Blessings...Mary

looks great one of my favorite comfort foods

Definitely GOLD + 5 stars! I made a bunch of individual pot pies a few months ago for a bunch of big-hearted 2nd shift police officers. The recipe I followed was way off on the amount of flour to use. That was the hardest part for me. The end result turned out great, but it wasn't without a ton of effort. I am going to save your recipe for my next attempt and see if I have better luck. Again, great job. First time reader tonight and I enjoyed the story behind your Chicken Pot Pie!

i like that you used chicken thigh meat and not breast and the idea of potatoes is fantastic! This looks so comforting and just plain delicious

Yum!! Potpie is comfort food to me. My Mum used to make me York frozen chicken pie, and she'd do chips (fries) in her deep fryer to go along with them. Oh-so-British, that pie and chips!

You know, I've never made potpie from scratch. I think it's time I did!

to des: yes exactly, thighs please,with skin and bones on (:

the pot pie looks yummy stephen, esp as it's cold and rainy outside now!

This is a classic comfort food that now, I can't get out of my head. I may just very well have to figure out where to make this during the weekend! =)

PS You left me such a nice comment the other day, on my "decade" post. It really made my day. Thank you! :)))