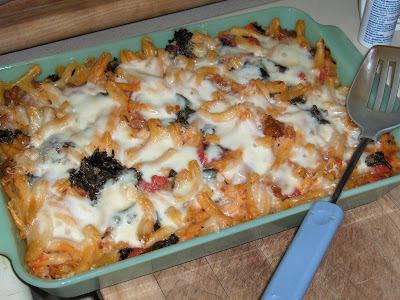 If you don’t subscribe to chow.com, think about doing so. They send me a recipe every day – every now and then it inspires me. This one did so. Initially I completely rewrote it. Then, in the end, I went back to it and did an adaptation. The changes? I added Italian sausage, used canned tomatoes instead of fresh, my pasta is different, and because our neighborhood supermarket doesn’t carry radicchio or treviso, I used kale.

Strozzapreti is not easy to find. It’s also not easy to describe. Imagine 2” long x 1” side rectangles which have been twisted into almost a tubular shape. It’s a nice dense pasta which held up perfectly to the pre-cooking and then the baking. Use penne rigate or ziti as did the chow folks. Oh, I also used 2 tbsp olive oil instead of the butter their recipe called for. This casserole is a huge amount of food for Peter and me, probably enough for 4 dinners, but we’ll lunch off it over the next several days.

Heat the oven to 400 degrees and arrange a rack in the upper third. Bring a large pot of water to a boil, add a healthy dose of salt and cook the pasta for ½ the time indicated on the package. Drain but do not rinse.

Heat the oil in the pot you cooked the pasta in over medium heat. Add onion and sauté 5 minutes. Add garlic and sausage and sauté until the sausage is cooked through, stirring occasionally (about 7-8 minutes). Season with salt and red pepper flakes.

Add tomatoes and their juice and kale and simmer until the kale has wilted (8-10 minutes), stirring occasionally. Stir in the cream, taste for seasoning and adjust. Add the pasta and toss to combine thoroughly.

Transfer to a 9” x 13” baking dish. Cover with foil and bake 10 minutes. Remove foil, sprinkle both cheeses on top and bake uncovered for 10 more minutes until cheeses are melting and the casserole is bubbling. Remove from oven, cover loosely with foil, and allow to rest for 5 minutes before serving.
Posted by Stephen C at 3:22 PM

delish just as written. Thank you.