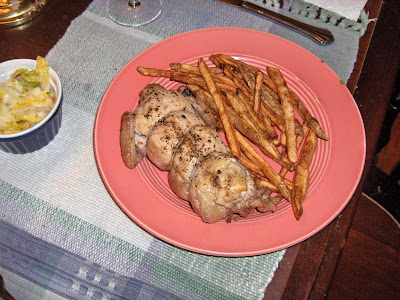 I prefer to post recipes that are my own creation. However, this one is worth sharing. When Peter and I saw this in our Cook’s Illustrated last summer we really wanted to try it. I kept putting it off. However, when we did fried squid for sandwiches (my post of 3/2/10), I cut up a potato and fried it in the used oil thinking that I could remove any fishy taste. The potato came out great and there was not a trace of fish taste. We ate it all. I strained the oil through cheesecloth and kept in cold (out on the porch) for a few days until we decided to try these fries last night.

I could have let them cook a few more minutes, but when I thought they were done I drained and salted them. They were soft/crispy and we were very happy with them. I’m still saving the oil and we will make them again real soon. Incidentally, the little ramekin next to the plate (which also includes our boned Cornish hens – posted today) contains homemade kimchi. I’ll be posting that today.

1. Combine potatoes, oil, and bacon fat (if using) in large Dutch oven. Cook over high heat until oil has reached rolling boil, about 5 minutes. Continue to cook, without stirring, until potatoes are limp but exteriors are beginning to firm, about 15 minutes2. Using tongs, stir potatoes, gently scraping up any that stick, and continue to cook, stirring ocacasionally, until golden and crisp, 5 to 10 minutes longer. Using skimmer or slotted spoon, transfer fries to thick paper bag or paper towels. Season with salt and serve immediately.
Posted by Stephen C at 11:37 AM