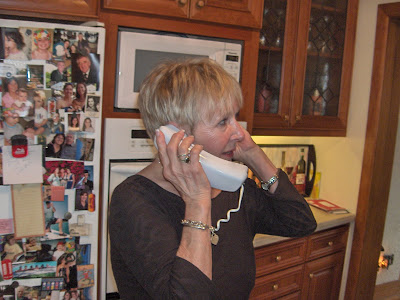 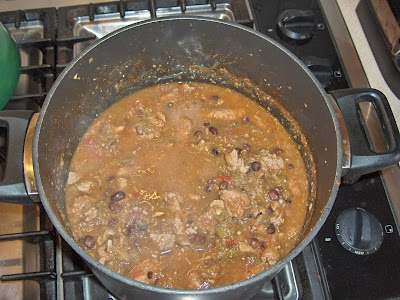 Introducing my friend Sandy. The last couple of New Year’s Days Sandy has brought a sample of her green chili for Peter and me to share. It’s very, very good, and after the most recent sample I suggested to her that I feature her on this blog.

Chili, like so many other dishes, is made a thousand different ways. I have my way, you have your way. This is Sandy’s way, although it came from a Hispanic school principal she worked for about 10 years ago. Sandy’s green chili has evolved, the inevitable consequence of not having a written-down recipe. Originally beans were not included. At some point potatoes were included, in the style of a green chili stew.

What Sandy put together this morning (with a minimal amount of assistance from me) included beans, in deference to the fact that I told her I had added some leftover beans to the chili she gave me this past January.

I certainly don’t expect you to follow this recipe – you can, and should, modify, expand, or ignore it all together.

So here it is, my first guest chef on theobsessivechef. 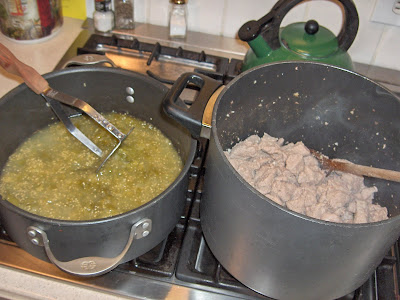 Put the pork into a large stewpot – no oil necessary – with the garlic. Add a small amount of water. Stir periodically and when the water disappears add some more. Do this 5 times until the pork is largely cooked through.

In the meantime, boil the tomatillos in just enough water to barely cover them until they soften and are ready to fall apart. Drain them of most of the water and mash with a potato masher until nearly pureed. (I would think one could do this in a food processor.)

Combine the tomatillos with the pork, add the tomatoes and Hatch chilis, barely cover with water, and simmer for maybe an hour until the pork is tender. Stir in the beans and add salt to taste.
Posted by Stephen C at 4:09 PM