Chicken livers with paprika and sneezes 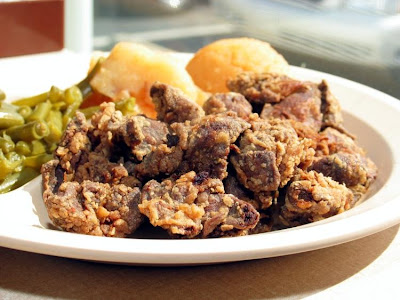 The sneezes are from the fact that I woke up this morning with a full-blown cold, the first I have had in several years. What must it have been like eons ago when there were no Kleenex? This is certainly not a recipe for everyone out there. But I grew up eating inexpensive chicken livers in addition to beef liver (we were a family of seven with a fairly limited income). I don't prepare it very often, for reasons I don't exactly know. I guess part of it is that we shouldn't be eating organ meats every day of our lives.
1 lb chicken livers, thawed if frozen
paprika
salt and pepper
flour for dredge
2 Tbs butter
2 Tbs olive oil

The livers are usually two lobes. Take a pair of kitchen shears and clean out the material where the lobes are connected. Season livers well with salt and pepper and coat them generously with paprika. Heat the butter and olive oil until the butter's foam has subsided. Dredge the livers with flour and saute them until medium rare – in other words, they should still be a bit pink in the middle. Serve immediately. An alternative method is to dredge them the same way and then cook them in some bacon fat. You certainly could saute a bunch of onion to accompany them as well. Excuse me, I have to sneeze.
Posted by Stephen C at 9:10 AM

Alexis LOVES chicken livers and gizzards. It's like a treat for her. Me, not so much.

Bill really likes chicken livers and they're OK with me. I always loved them until years ago when served at someone's house, they were horrendous and made me sick. Bill's mom made the best---cooked with lots of bacon and onions. Definitely something to not eat often! Be better soon!

I hope you feel better soon, Stephen. Nothing sucks more than a bad cold.

But these look really interesting. I've never had them this way. I do love me some chopped liver, and I love pate but I've never actually made any kind of liver. The hubs LOVES liver and onions. Clearly I'll have to give this a try and make him a happy man. Wonder if the kids would dig it? They do love pate.

Feel better! Lots of chicken soup and orange juice. I know it's cliche but it works for me. So does won ton soup! :)

Dear, dear, poor you - Sophie, my eldest also woke up with an awful cold. I'm not altogether sure she would go for the chicken livers, although I like a little liver now and then. A kidney isn't bad either - a steak and kidney pie? The paprika would be good I'm sure. Feel better.
Mary

My mom used to sauté them with bacon, peppers, and onions.

Sorry to hear you have been ill. Are you better now? It sounds like you have been giving your body the loving attention it needs to improve health.