Posole for the common man 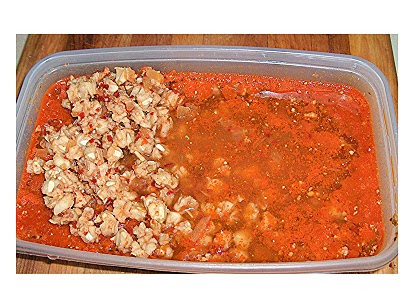 This turned out very well. I have posted posole before, but without attracting much attention. Also, since the recipe is very fluid, this falls into the category of "do what you have to do with what you have." I did get to the Hispanic market yesterday morning where I used to shop in the 90's during our first sojourn in DC. It's a little limited, although they seem to have a magnificent meat department - not large but well-stocked. This is a bare-bones posole. No chorizo, I'm using up some pork loin chops I have. I used only 1 can of hominy, no really hot peppers, some pasilla peppers (4, with seeds removed) (brings flavor and color but not much by way of heat), and a judicious mix of water and chicken broth. I seasoned as I went along and was pleased with the result. Tasty, mild, with just hints of a real Mexican broth (but then I'm not a real Mexican). If you want a soup/stew that's off the beaten track, get yourself some chorizo, some canned hominy, some dried peppers, and perhaps some Mexican oregano from the south of the border section at the market. Those are the things that bring Mexican to the party. Or just invite a Mexican. Anything else you do is just a bonus. By the way, the pasilla peppers (dried to start out with), when soaked and pureed, bring the color and essential flavor to this dish.
Posted by Stephen C at 2:11 PM

Looks so good. I have posole on my try list, I finally found the hominy.

The color is great. I've never made posole but it's on my must try list.

I love your dishes - they're really unusual - or at any rate very unBritish - excellent flavors here - I'd like a dish now. Thanks for your encouraging and very nice comment.
Mary

I think your posole looks delicious! I have never made it myself but reading about all those delicious flavors has inspired me and made me really hungry - thanks for sharing!

All the Latin markets here have very good looking meat too....I've never tried it...I just buy pork skins there...but the beef is the most red beef I have ever seen...I asked a friend of mine why it was so red...he told my all the beef in those stores is really horse....I hope he was kidding, but I still haven't tried any.

Sounds like great comfort food! I love using dried chili peppers! Like yu say they add such vibrant color and depth to so many dishes!

just found your blog! I love it... can't wait to browse around more! and i love posole, this recipe is a keeper!

Posole was the first thing I made when I stumbled upon chorizo.